Don W in Rockhampton has sent through some pictures of some recent interesting arrivals into Rockhampton Airport.

It seems that Virgin Australia are repainting their 'promotional' aircraft, with Boeing B737-800 VH-VUZ spotted early on Tuesday 25 October wearing a plain white colour scheme. 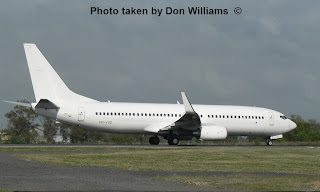 Virgin's other B737 that promoted their partnership with the AFL - VH-VUY - has also been spotted in the Virgin Australia network wearing the new Virgin livery - we'll look out for it in Rockhampton or Mackay!

Another 'promotional' aircraft is Virgin's B737-700 VH-VBY which wears a blue colour scheme highlighting that it was the 50th aircraft that Virgin Blue/Virgin Australia received. 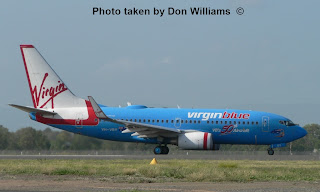 Don W was fortunate to catch it on Saturday 22 October at Rockhampton as it is planned to lose this lovely colour scheme and revert to the Virgin Australia livery in December this year.

Another interesting arrival, this time on Friday 21 October, was West Wing Avation Cessna 404 VH-SZA. It is pictured parked on the General Aviation apron. 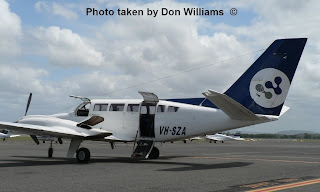 Elsewhere Don W managed to catch a new arrival for R-Mach Aviation. R-Mach fly crop spraying and water bombing aircraft over the local area. This new arrival is a Weatherley Aviation 620A aircraft registered VH-WEA. It is pictured outside R-Mach's hangar on the General Aviation side of Rockhampton Airport. 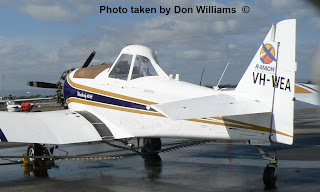 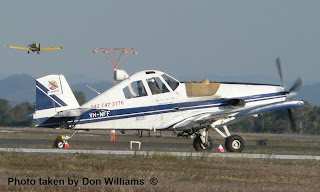