Storms in Central Queensland have caused chaos for several travellers over the weekend. One storm rolling through Rockhampton was captured late today. 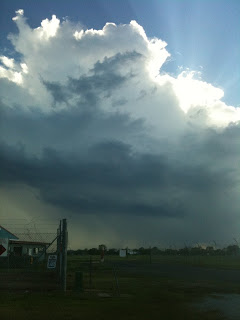 About 96 people flying from Brisbane to Mackay with Jetstar on Saturday 10 December were diverted to Townsville because of storms. They were then bussed back to Mackay as their A320 VH-JQL flew on elsewhere.

The usual one hour and 20 minute trip took more than 11 hours for the passengers.

A Jetstar spokesperson is quoted as saying that the diversion was the best option in the poor weather and that they had tried to make the journey as comfortable as possible.

Meanwhile, a QantasLink flight from Brisbane to Rockhampton on Sunday 11 December was rescheduled and eventually made it to Rockhampton on Monday. Consequently, QLK2349 was delayed today by around 2 hours.
Posted by Damian F at 9:10 PM