Last week, former Paralympian and adventurer Dave Jacka flew out from Tooradin in Victoria, on a flight to break a world record.  His challenge - to be the first quadriplegic to fly solo around Australia.

This daring flight will involve Dave (and company) flying to 21 rural towns and cities around the coastline of Australia - as shown below. 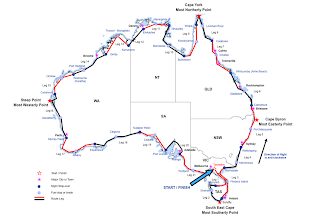 What's in-store for Dave is a four and a half week tour of regional and rural communities around the 16,000km coastline of Australia.

On Tuesday 7 May, Dave in Jabiru 24-5558, along with support aircraft - Piper PA-32R-300 VH-WMQ and Piper PA-28-181 VH-SDW - were captured by local plane spotter Jamie C as they passed through Gladstone Airport on their way North from Caboolture.

At the end of the day, the three aircraft ended up at the Whitsunday Airport at Shute Harbour / Airlie Beach.  On Wednesday 8 May, they are expected to head further North through Innisfail and on to Cooktown.

Dave’s mantra is that with an open mind and determination, the impossible becomes possible.

For more information go to:  http://www.onawingandachair.org.au/