Local plane spotter Jamie C was again on the scene at Gladstone Airport on Wednesday 1 May as some interesting visitors called in, along with the usual commercial traffic which we will cover later.  And the action started early in the day with the arrival from Brisbane of the Queensland Government (State of Queensland) Raytheon Hawker 850XP bizjet VH-SGY.

Believed to be carrying the Deputy Premier Jeff Seeney, VH-SGY spent most of the morning at Gladstone and eventually departed back to Brisbane.

Also arriving early was FKG Air (Redjet Aviation) Hawker Beechcraft B200GT VH-FKB which was photographed by Jamie arriving from Toowoomba.  It later departed back to Toowoomba.

As the morning wore on, a couple of more visitors arrived into Gladstone, and were photographed by Jamie C as they departed for parts unknown. 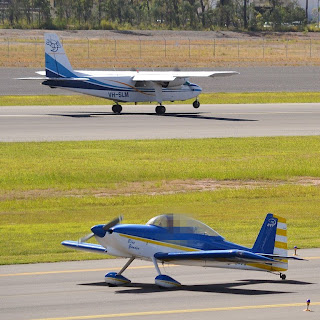 As shown above, a familiar sight in Central Queensland in the form of the Rockhampton Aero Club's Pilatus Britten-Norman BN-2A-8 Islander VH-SLM was spotted departing.  It had earlier arrived from Great Keppel Island. 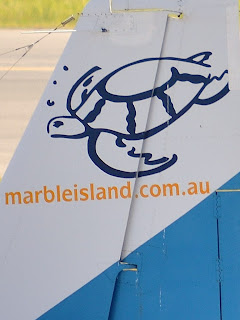 Also spotted was this sporty looking Vans RV-8 VH-ZUR which is registered in Brisbane. 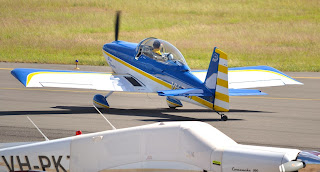 As can be seen in the photos above, light aircraft parking is again in short supply at Gladstone Airport, with at least three aircraft parked on the grass, away from the General Aviation parking area.

Last of the special visitors into Gladstone Airport on Wednesday 1 May was Agusta A109S VH-CTC.  The chopper is registered to GSM Helicopter on the Gold Coast and was captured by Jamie as it touched down Caloundra.

Also of note, just prior to the arrival of VH-CTC, the locally-based Careflight Bell 412EP rescue helicopter VH-XCY was photographed by Jamie as it departed to Rockhampton.

Big thanks to Jamie for contributing his fantastic photos yet again to the CQ Plane Spotting Blog.  As we mentioned in a post below, Jamie has recently started his own Facebook page where he has uploaded a lot more of his fantastic plane spotting photos that he has captured at Gladstone Airport over recent years.