A Busy Rockhampton Airport on Wednesday - Capricorn Rescue Helicopters with Mo's, Virgin Diversion From Mackay, and RAAF BBJ A36-002

It was certainly a busy day at Rockhampton Airport on Wednesday 27 November, with local plane spotters Ben O and 'IAD' capturing some of the more unique visitors to the beef city during the day! 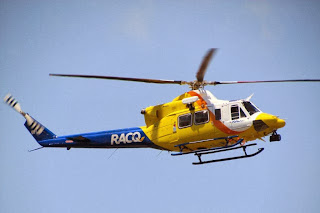 Australian Helicopters has swapped its Bell 412 Rescue choppers that operate at Rockhampton Airport for the Capricorn Helicopter Rescue Service (CHRS).  Ben captured Bell 412 VH-LSY arriving into Rocky from Mackay.  Eagle-eyed readers may be able to note the moustache - or 'mo' - painted on the front of VH-LSY to signify the Rescue Service's participation in the annual Prostate and Men's Cancer Awareness campaign known as 'Movember', where men all over Australia are encouraged to grow a 'mo'. 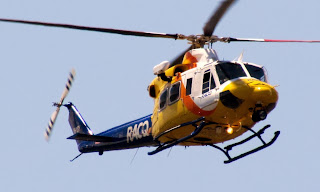 In fact, as shown below, the chopper that VH-LSY is to temporarily replace - fellow Australian Helicopters Bell 412EP VH-EPR - also sports a 'mo' for Movember. 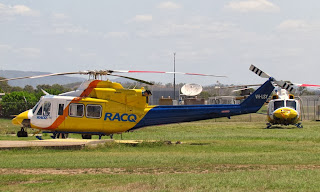 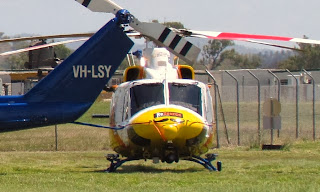 A little earlier on Wednesday 27 November, Rockhampton Airport had a unscheduled arrival in the form of Virgin Australia Boeing B737-700 VH-VBY which diverted to Rocky operating the VOZ601 service from Brisbane to Mackay.  VH-VBY diverted to Rockhampton due to rather inclement weather in Mackay at the time where some 50mm or so of rain fell in a very short time during the morning, causing some minor flash flooding. 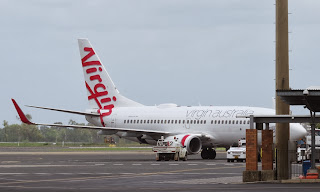 VH-VBY evenutally departed to Mackay, and then departed back to Brisbane as usual, albeit a little late, as VOZ604. 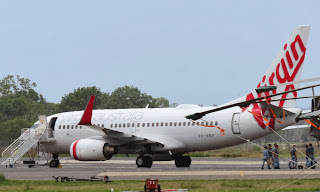 It should also be noted the Wednesday morning Tigerair (Tiger Airways) Airbus A320 service from Sydney to Mackay (TGW386) diverted to Brisbane, after unsuccessfully trying to land at Mackay.  This was operated by A320 VH-VNF. 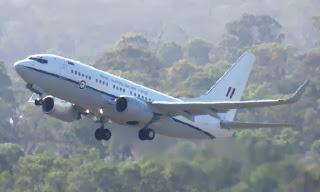 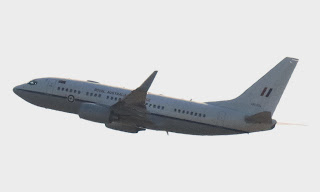 It is also believed that fellow RAAF BBJ A36-001 may have landed in Central Queensland during the earlier part of the week with it noted on various web-based flight tracking sites flying as "Envoy 9".