VH-LAH is owned by Lloyd Helicopters and operated by CHC Helicopters Australia, and is one of a number of choppers used for RAAF Search and Rescue missions. On this ferry flight, it was noted using radio callsign of "Choppa 42".

It appears that "Choppa 42" has flown into Townsville to provide support for RAAF F/A-18 Hornets from Number 3 Squadron and PC-9 aircraft from Number 4 Squadron which are participating in the RAAF's Exercise Black Dagger. 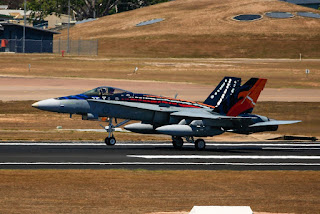 Exercise Black Dagger is a field training exercise that is being held at RAAF Base Townsville and surrounding airspace over the next couple of weeks starting on Monday 2 October.  Exercise Black Dagger is the culmination of Number 60 Joint Terminal Attack Controller (JTAC) course designed to produce combat-ready JTAC-qualified personnel.