On Monday 30 April, the Queensland Police Service (Airwing) (State of Queensland) Textron Aviation (Cessna) 208B Caravan VH-PQX was spotted departing Rockhampton Airport for Cairns.  It had earlier arrived from Cairns via Townsville. 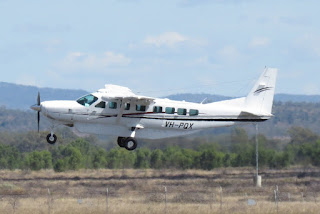 The Caravan has only joined the Police (Airwing) fleet at the start of this year and seems to be operating out of Cairns Airport.  It joins three other Cessna 208B Caravans - VH-PSQ, VH-PSV and VH-PSY - which appear to operate from Brisbane, Cairns and Mount Isa on various transport and other roles.

Meanwhile, also on Monday 30 April, it appears the Queensland Police Service (Airwing) (State of Queensland) Cessna 560 Citation Ultra bizjet VH-PSU was operating the three-times-a-week prisoner transfer flight run.  VH-PSU was noted visiting Townsville, Rockhampton, Maryborough and Mackay Airports while on a busy day of flying from and back to Cairns. Of interest, it had positioned from Brisbane to Cairns on Sunday 29 April.