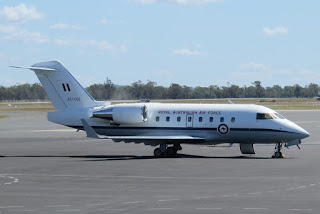 It touched down at Rocky from RAAF Base Richmond in New South Wales.  The Challenger was noted to bring Federal Minister for Defence Marise Payne.

Meanwhile, also on Monday 30 April, RAAF Airbus A330-200 / KC-30A Multi Role Tanker Transport (MRTT) A39-002 "Dragon 34" was noted departing RAAF Base Amberley with it reportedly heading for Rockhampton to complete airwork.  Unfortunately though, A39-002 encountered a technical problem and turned back to Amberley.

Finally, after the sun had set on Monday 30 April, Australian Army NH Industries MRH-90 Multi-Role Helicopter A40-023 "Destrier 69" was noted completing airwork around Bowen and Proserpine (Whitsunday Coast) Airports on a flight from and back to Townsville.