Late on Saturday 26 May, Machjet (Machjet International) Cessna 525A Citation CJ2 bizjet VH-ZIY was noted arriving into Mackay Airport.  It appeared to fly up from the Gold Coast. 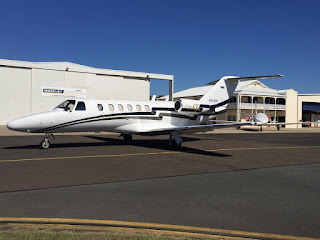 After a couple of hours on the ground, VH-ZIY was noted returning to the Gold Coast.

It was interesting to note that VH-ZIY had earlier flown into the Gold Coast, returning from Townsville after arriving into the tropical North late on Friday.

UPDATE!  Late on Sunday 27 May, VH-ZIY made another late visit into CQ, this time calling into Rockhampton Airport again from the Gold Coast.  It again looked to return to the Gold Coast after some time on the ground.
Posted by Damian F at 9:12 PM