On Sunday 27 May, Qantas Airways Boeing B737-800 VH-VZM made its first visit into Central Queensland days after it emerged from the paint-shop having been re-painted into the airline's new 'Silver-Roo' colour scheme - and a day after sister-ship VH-VXM did the same - see Blog post below. 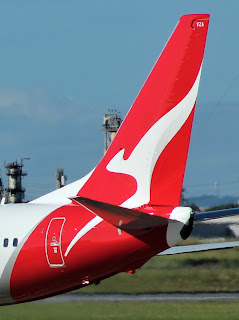 VH-VZM was noted arriving into Hamilton Island Airport from Sydney as QFA866 and marks the sixth time that the new and updated Qantas livery and kangaroo logo has appeared in CQ on a Qantas B737-800.

Of interest, VH-VZM was re-painted Flying Colours facility at Townsville and only emegered from the paint-shop three days ago!  It joins several other B737-800s in the Qantas fleet which have had the new livery applied.

Now, with as many as 18 of the current Qantas Boeing B737-800 fleet now adorned in the new 'Silver-Roo' livery, we hope to start to see a few more pop into CQ at Hamilton Island Airport over the coming weeks!