As we've reported at various times previously, General Aviation Maintenance (GAM Air) operate one of their fleet of AeroCommander 500-S Shrike aircraft on a week daily freight run from Emerald to Longreach Airport via Barcaldine. 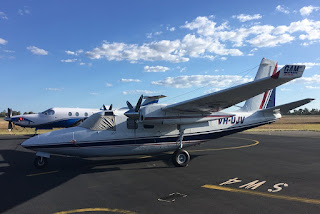 VH-UJV was photographed back at Emerald Airport later on Tuesday 24 January after arriving back from Longreach and Barcaldine.

Of interest, VH-UJV has predominately been operating in Victoria and New South Wales and first flew into Brisbane earlier in January.  It has been operating out of the capital on freight flights since, including several times into CQ on the Brisbane to Maryborough, Bundaberg and Gayndah run.

Also, up until Monday 23 January, fellow GAM Air AeroCommander 500-S VH-UJN had been operating the freight run between Emerald and Longreach, and it flew to Brisbane late on Monday evening.

Also spotted at Emerald Airport during the late afternoon on Tuesday 24 January was the familiar sight of the smart little Vanderfield Pilatus PC-12/47 corporate turbo-prop VH-WPH which had earlier arrived from its Toowoomba base. 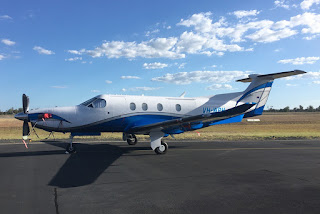 And resting nearby also at Emerald Airport on Tuesday 24 January was Corporate Air / Vee H Aviation Cessna 441 VH-VED.  While its exact movements are not known, it has been noted flying around various parts of Central Queensland in recent weeks including Emerald, Clermont and Mackay.  VH-VED was noted visiting Mackay Airport last Thursday 19 January. 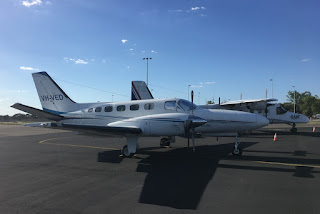 Finally, in the background eagle-eyed spotters will see GAM Air Dornier DO 228-202 VH-VJN which operated the week-daily freight run into Emerald Airport from Brisbane via Biloela / Thangool Airport also on Tuesday 24 January.  It later departed to Rockhampton and Brisbane.