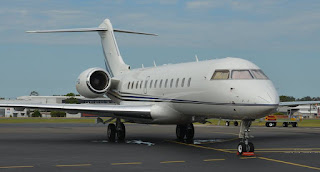 It is suspected that the visit of the big Global Express coincided with the visit to Gladstone of some of the biggest names in Australian rock music with Jimmy Barnes being joined by Noiseworks front man, Jon Stevens and classic rockers the Radiators, performing at the local Marly Brown Oval.

Seemingly after the concert was complete, VH-VGX departed Gladstone Airport for Brisbane where the concert series moved to on Sunday 22 January.

Of interest, there was another 'charter' of sorts into Gladstone Airport also during the afternoon and evening of Saturday 21 January with Altitude Flight Operations (New South Wales) Metro II VH-SSV flying in from its Archerfield base via Brisbane.  It too departed after dark, flying back to Brisbane before making the short hop back to Archerfield.

Finally, an interesting and out-of-the-ordinary movement into Gladstone Airport late on Friday 20 January was QantasLink (Cobham Aviation) Boeing B717-200 VH-YQT which arrived from Brisbane as QJE1700.  It looks like the flight could have been a charter, although it was possible that QantasLink were clearing a possible 'backlog' following the reported problems of their Sunstate Airlines Dash-8-Q400 turboprops during the week.  VH-YQT returned to Brisbane a little later in the evening, re-positioning empty as QJE6200.

Sincere thanks to Michael for taking the time to capture and send through these great photos of a great corporate visitor!

All photos taken by Michael Fleetwood  ©
Posted by Damian F at 8:41 PM