On Monday 9 January, Virgin Australia Embraer E-190 VH-ZPA is reported to have departed Australia for good, flying out of Brisbane for Apia (Tonga) as VOZ9901.  It has since continued to Honolulu (Hawaii), Van Nuys (California) and Nashville (Tennessee) for post-lease maintenance. 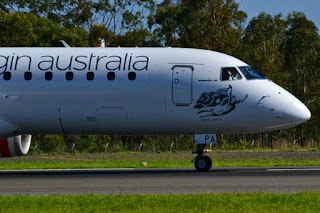 VH-ZPA was the very first of eleven new E-190 aircraft that were originally ordered by Virgin Blue in November 2006.  It arrived into Brisbane at the conclusion of delivery flight from Sao Jose dos Campos in March 2008 and entered service the next month.  It took up the name 'Candid Canberra'. 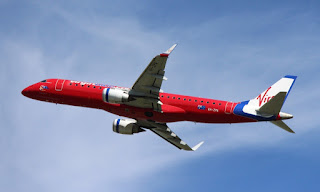 After re-painting into the new Virgin Australia livery, it then wore the name ‘Apollo Beach’. 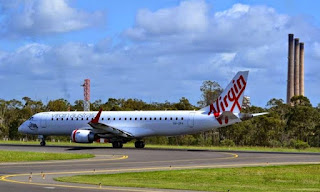 It's sad to see the E-190s disappearing - and as we have been reporting - Virgin Australia will eventually withdraw all remaining Embraer E-190 jets, as well as between four and six ATR 72 turboprops, on a cost-cutting program across all parts of the airline which will also include an unspecified number of job losses.

It was interesting to note that VH-ZPA's final visit to CQ was an overnight stay when it operated into Mackay Airport late on Sunday 1 January from Brisbane as VOZ621 before returning to the capital on Monday 2 January as VOZ604.