On Monday 16 January, the Queensland Government (State of Queensland) Airwing Raytheon Hawker 850XP bizjet VH-SGY was spotted on the ground at Longreach Airport.  It had earlier arrived from Brisbane. 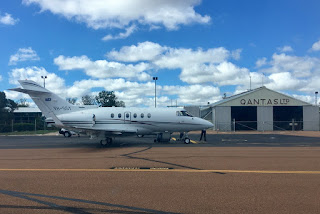 Later in the afternoon, VH-SGY departed to Roma Airport where it stayed for the night.

At the time of writing, VH-SGY was due to depart Roma and return to Brisbane on Tuesday 17 January.

Meanwhile, noted calling into Longreach Airport over the weekend - in the very wee small hours of Sunday 15 January to be precise - was  LifeFlight (Aeromed) LearJet 45 bizjet VH-VVI "Ambulance 451".  It arrived from and later departed back to Brisbane.

Also on Monday 16 January, the Queensland Police Service (Airwing) Cessna 560 Citation Ultra bizjet VH-PSU was back in the air on prisoner transfer flights calling into Mackay and Rockhampton Airports while on a busy day of flying that started and finished in Cairns.

Finally, it's worth mentioning that on Saturday 14 January, Embraer EMB-550 Legacy 500 bizjet N142GZ operated a return flight to the Gold Coast from and back to its Mackay Airport base.