A couple of interesting bizjet movements around Central Queensland airports on Wednesday 7 August including the arrival of Brenzil Dassault Falcon 7X bizjet VH-CRW into Hamilton Island and Mackay Airports. 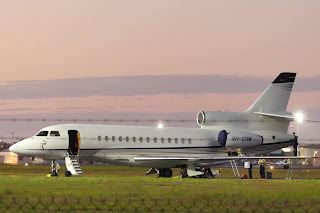 It looked to fly up from Sydney and is believed to have dropped off passengers at Hamo before flying down to Mackay Airport for parking.  Indeed as the photo above shows, it was prepared to be staying for at least the night.

Meanwhile, also arriving into Hamilton Island Airport, also on Wednesday 7 August, was AAA Aircraft / Flight Options (Australia) Cessna 650 Citation VII bizjet VH-ING.  It looked to arrive from Sydney and appears to be staying for at least the night.

While LifeFlight (Aeromed) LearJet 45 bizjet VH-CXJ was noted completing a training flight during the late afternoon also on Wednesday 7 August.  It flew up from Brisbane and completed airwork at Bundaberg Airport including two missed approaches before heading to and landing at Gladstone Airport for a short time.  VH-CXJ then returned to Brisbane via more airwork at Bundaberg Airport.