On Friday 9 August, UP Aviation (of Abbotsford, Victoria) Bombardier BD-700-1A10 Global Express XRS bizjet VH-UPH was noted departing Mackay Airport and calling into Rockhampton Airport.  It was spotted below resting quietly on the Mackay Airport apron earlier on Friday, after it arrived from Townsville the previous day. 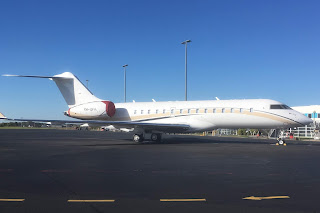 VH-UPH was photographed below parked on the Northern part of the Rockhampton Airport parking apron and looked to be staying for the night. 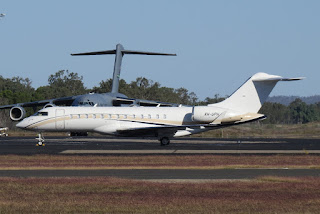 UPDATE!  Indeed VH-UPH did stay the night and ended up departing Rockhampton Airport for the Gold Coast on Saturday 10 August.

Meanwhile, also noted visiting Rockhampton Airport, also on Friday 9 August, was the Queensland Government Airwing (State of Queensland) Raytheon B300 Super King Air VH-SGQ.  It arrived from and later departed back to Brisbane.

Finally, LifeFlight (Aeromed) LearJet 45 bizjet VH-CXJ "Ambulance 452" was noted completing a pre-dawn visit to Emerald Airport also on Friday 9 August.  It arrived from Brisbane and later departed to the Sunshine Coast before returning to the capital a short time later.