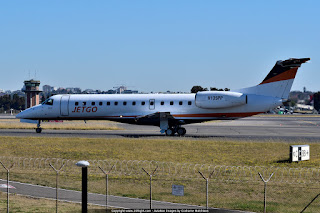 As shown, the E-135 has been placed onto the American Aircraft Register as N135PP and departed Sydney bound for Port Moresby and Guam.  It will eventually head to the United States of America (USA).

Of interest, VH-JGB and sistership and fellow E-135 VH-JZG have sat on the Corporate Aircraft Parking Apron at Sydney Airport since JetGo entered Administration back in June 2018.

VH-JGB was the second E-135 jet aircraft to be delivered to Jetgo back in October 2012.


Sincere thanks to Sydney-based specialist aviation photographer Grahame Hutchison for allowing us to share his great photo and information about the departure of the former VH-JGB.

Photos taken by Grahame Hutchison and 'Mick'  ©
Posted by Damian F at 8:45 AM