An interesting visitor to be noted at Longreach Airport this was Corporate Air / Vee H Aviation SAAB 340B VH-VEB which was noted departing for RAAF Base Tindal at Katherine in the Northern Territory on Wednesday 7 August. 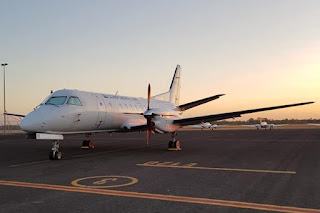 It's exact movements aren't fully known, however it looks like the SAAB is on another around-Australia tour on behalf of well-known company 'Bill Peach Journeys' with it noted departing Sydney for the North-West on Monday 5 August.

UPDATE!  VH-VEB was photographed above at Tindal early on Friday 9 August.