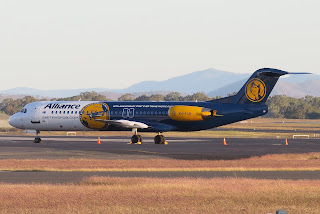 After the game was complete, the triumphant Blackhawks then flew back to Townsville with VH-FGB operating as UTY3382.

As we’ve mentioned previously, VH-FGB is adorned in a very attractive livery celebrating the 90th anniversary of the first trans-Pacific crossing completed in 1928 by four aviators including Sir Charles Kingsford-Smith in his Fokker F.VIIb/3m Trimotor named "Southern Cross".

And of interest, Alliance Airlines is soon to take delivery of a pair of attractive Fokker F-70 logo jets in special colours.

Alliance Airlines is continuing its partnership with Breast Cancer Network Australia (BCNA) by operating a special themed Fokker F-70 in full BCNA colours - supporting Australians affected by breast cancer.  The 'Pink Lady' coloured F-70 is designed by Lila Design and will wear the registration marking of VH-NUU.  It is due for delivery into Australia shortly.


VH-NUU will surely attract some attention during its work flying around regional Australia.  More about BCNA at:  http://www.bcna.org.au

While Alliance Airlines' final Fokker F-70 jets due for delivery which will be registered VH-NUY will be painted into a livery to commemorate a significant Australian aviation event.  The livery will commemorate the 100th anniversary of the arrival of the first aerial flight from England on 10th December 1919.


VH-NUY will reportedly fly to Darwin from Europe in December this year in a livery designed by the world acclaimed Netherlands design house Lila Design.  It will recreate the route from London to Darwin and touch down exactly 100 years to the minute at 3:40pm on December 10 2019.


Hudson Fysh and Paul McGinness, representing the Australian defence department, were the first to officially welcome the four airmen.  On 16 November 1920 Fysh and McGinness with grazier Fergus McMaster founded Queensland and Northern Territory Aerial Services Ltd (QANTAS). No doubt inspired by the heroic achievements of the Vimy crew, the previous year.

UPDATE!  Fokker F-70 VH-QQW was in fact re-painted into the commemorative livery described above.

Finally, it's worth noting that Alliance Airlines took delivery of its latest Fokker F-70 VH-NUO at Perth Airport in Western Australia in late June this year.  It has been operating out of Perth on mostly Fly-in Fly-out (FIFO) charter flights around the state and other parts ever since.  We hope to see it on the East coast of Australia soon!