Very late on Wednesday 21 August, Greensill Capital (Isle Of Man) Ltd Dassault Falcon 7X bizjet M-GGBL was noted arriving into Bundaberg Airport from Sydney and Brisbane.  It had arrived into Sydney from overseas the previous day. 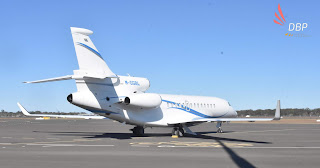 After staying for the night, the sleek Falcon 7X was photographed by local plane spotter Dan B early on Thursday 22 August.  It then departed back to Brisbane during the middle part of the afternoon.

At the time of writing, M-GGBL was due to return to Bundaberg Airport very late on Thursday 22 August.

M-GGBL is a familiar visitor to the rum city, with this being its third visit this year!

UPDATE!  After sitting on the ground at Bundaberg Airport for the day, late on Friday 23 August, M-GGBL departed Bundy for Brisbane before it then departed overseas to Don Muang International Airport (Thailand), Muscat (Oman) and Hawarden (Wales) - spending almost 24 hours in transit!

Meanwhile, also spotted this week at Bundaberg Airport were a pair of McDermott Aviation / Heli-Lift Australia helicopters which have returned to the region in preparation for the forthcoming bushfire season. 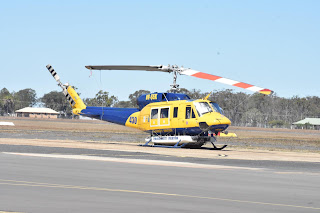 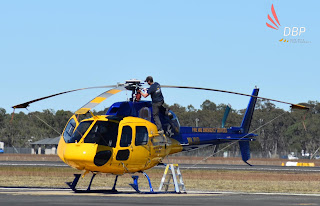 Bell Textron Helicopter 214B-1 Big Lifter helicopter VH-SEK and Aerospatiale AS.355F1 Squirrel helicopter VH-YUR were both photographed (above) parked on the Bundaberg Airport apron during this week.