A Couple of Bizjets at Central Queensland Airports This Week

Even though it was seemingly a pretty quiet week for 'interesting' aircraft movements throughout Central Queensland, there were still a couple of bizjet movements that are worth mentioning.

Early in the week on Monday 30 July, Cessna 560 Citation Ultra VH-SJP popped into Rockhampton Airport from the Sunshine Coast. The Citation is owned by Aeromil Pacific and operated by Flight Options, and after a little while, it was photographed departing to Kingaroy in the late afternoon sun. 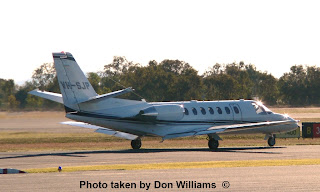 On Thursday 2 August, Bond Air Charter's Cessna 525A CitationJet2 bizjet VH-MOR was again in Central Queensland, this time arriving into Longreach Airport from Winton. On Friday 3 August, it departed early to Barcaldine, and then later Brisbane.

Also at Longreach Airport, on Friday 3 August, Careflight LearJet 45 VH-CXJ arrived before dawn from Townsville. Soon after, it returned to Townsville direct.  (File photo below) 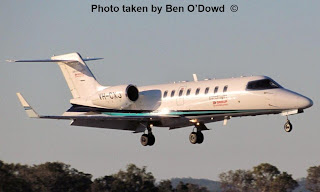 Lastly, On Friday 3 August, Jetstream Aviation Cessna 550 Citation II VH-VDF popped into Hamilton Island Airport from the Sunshine Coast. It then departed to Hughenden.
Posted by Damian F at 10:06 PM