And I missed the fun…

It was a very busy day at Clermont Aerodrome on Thursday 23 August with a mixture of fly-in and fly-out (FIFO) arrivals during the day and night.  During the day, three King Air aircraft arrived and departed, while there were five Skytrans Airlines Dash-8 arrivals in the morning and then in the evening.

The action began early in the morning, with what seems to be a 'new' Skytrans-operated FIFO charter flight from Brisbane, with Dash-8-300 VH-QQN touching down as SKP820.  Shortly after, VH-QQN departed back to Brisbane as SKP821. 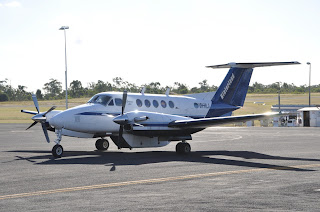 Then, after the sun went down, the 'usual' four Skytrans Dash-8 arrivals came in from Brisbane and the Sunshine Coast, with VH-QQH, VH-QQL, VH-QQM, and VH-QQN all noted.
Posted by Damian F at 8:13 AM