During the evening on Thursday 20 September, Royal Australian Air Force (RAAF) Alenia C-27J Spartan transport aircraft A34-010 was involved in a smoke emergency as it approached Proserpine (Whitsunday Coast) Airport. 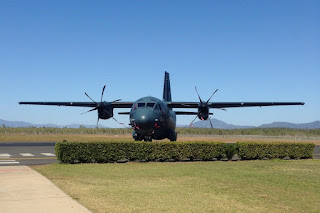 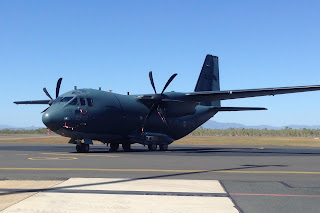 Details are sketchy but it is believed that Spartan was preparing to complete a touch-and-go landing at Proserpine Airport during a training flight from Townsville.  On lowering the landing gear, the cockpit filled with smoke.

The crew made an emergency landing at Proserpine Airport.  A34-010 remained parked at Prosie during Friday 21 September as pictured above.

Another MRH-90 A40-021 flying as "Destrier 127" was also noted completing airwork out of Townsville also late on Thursday 20 September.