On Friday 7 September, AirMed Australia Cessna 510 Citation Mustang bizjet VH-NEQ was spotted on the ground at Mackay Airport.  It had earlier arrived from Bankstown via Cessnock in New South Wales. 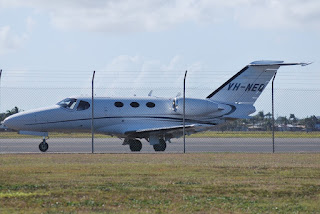 After spending a couple of hours on the ground, VH-NEQ returned South to Maitland before heading back to Bankstown.

VH-NEQ usually calls into CQ Airports operating medical evacuation flights but on this occasion it was heard using its registration as its callsign suggesting it may have been operating a training or closed charter flight.

Meanwhile, over the course of Friday 7 September and Thursday 6 September, a corporate turboprop in the form of Edwards Coaches Cessna 441 Conquest II VH-OXY was noted visiting several CQ Airports (amongst other places).  On Thursday, it called into Emerald Airport from Cobar and Bankstown in New South Wales before departing to Biloela / Thangool Airport, Baryulgil and then the Toowoomba Wellcamp Airport.  Then on Friday, VH-OXY reversed its journey except it departed Emerald Airport for Roma Airport before it ended a busy few days of flying back at its Armidale base.

Before dawn on Thursday 6 September, LifeFlight (Aeromed) LearJet 45 bizjet VH-VVI "Ambulance 451" was back in CQ once again, calling into Hervey Bay (Fraser Coast) Airport from Townsville and later departing to Brisbane.

Finally, back at Mackay Airport but earlier in the week, A C Airways / Smart Air (of Albury in New South Wales) Piper PA-31 Navajo B VH-KMW was spotted resting in the General Aviation (GA) Apron on Monday 3 September. 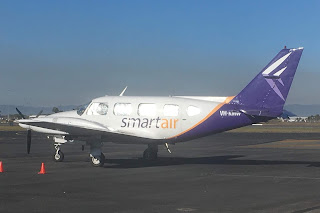 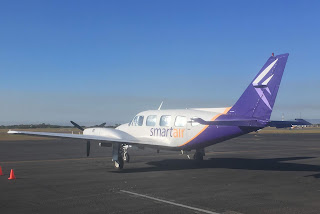 VH-KMW is believed to be operating aerial survey flights around the region and was noted arriving into Mackay Airport from Far North Queensland last Wednesday 29 August.

UPDATE!  VH-KMW was noted flying into Rockhampton Airport on Sunday 9 September and has since been noted completing powerline inspections from the local Stanwell Power Station.