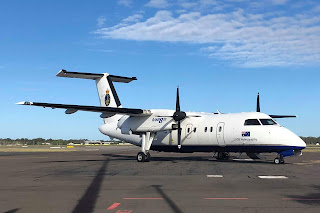 It has been based at Bundaberg Airport completing almost daily aerial survey flights since late April.

VH-LCL was this week noted completing airwork off the coast of Rockhampton before returning to Bundy each time after around 5-6 hour long flights.  It has also operated off the coast of Gladstone and around Heron Island.

The heavily modified Dash-8-200 is usually based at Cairns Airport with Cobham Aviation.