Really great to see another special livery in Central Queensland, and on Sunday 17 November, local plane spotter Michael F was on hand at Gladstone Airport to capture some great photos of Alliance Airlines Fokker F-70 jet VH-QQW paying a visit wearing a special livery commemorate the 100th anniversary of the first flight to Australia from England.

VH-QQW made its first visit to CQ on Friday 15 November, also operating into Gladstone Airport. 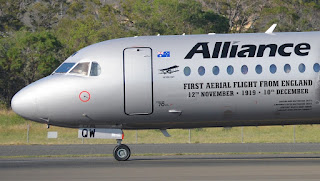 On Sunday, it made two visits, completing the VOZ2909/2908/2911/2910 flights from and back to Brisbane on behalf of Virgin Australia Airlines.

VH-QQW was ferried back to Australia in late September into Perth following a period of maintenance in Europe including re-painting into this livery designed by the world acclaimed Netherlands design house Lila Design.  After operating in the Western Australian capital until early November, VH-QQW was then one of the star attractions at the RAAF Base Edinburgh Air Show.  VH-QQW was then ferried to Brisbane where it appears to have now commenced operations.

As mentioned, VH-QQW has been painted into a livery to commemorate a significant Australian aviation event in the form of the 100th anniversary of the arrival of the first aerial flight from England on 10th December 1919.


Hudson Fysh and Paul McGinness, representing the Australian defence department, were the first to officially welcome the four airmen.  On 16 November 1920 Fysh and McGinness with grazier Fergus McMaster founded Queensland and Northern Territory Aerial Services Ltd (QANTAS). No doubt inspired by the heroic achievements of the Vimy crew, the previous year.

Sincere thanks to local plane spotter Michael F for taking the time to capture and send through these great photos of a great looking visitor to CQ!