Noted making its first visit into Central Queensland on Monday 25 November was Jetstar Airways Airbus A320 VH-JQX which emerged from the hangar a fortnight earlier adorned in stickers promoting the well-known rental car company 'Hertz'. 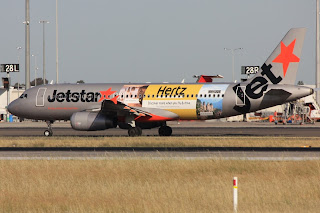 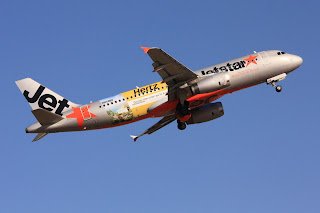 VH-JQX was noted arriving into Hamilton Island Airport from Sydney as JST846.  It then was heading back to Sydney as JST849 but diverted to the Gold Coast where it was on the ground for around 90 minutes before continuing to Sydney.

VH-JQX is pictured at Adelaide Airport late last week as it passed through the South Australian capital on a scheduled service.

All photos taken by Tony Haynes  ©️
Posted by Damian F at 9:15 PM

Email ThisBlogThis!Share to TwitterShare to FacebookShare to Pinterest
Labels: Airbus, Hamilton Is, Jetstar