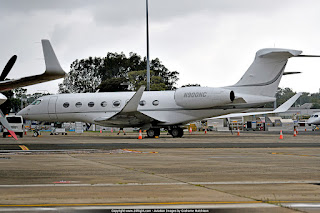 The sleek Gulfstream looked to arrive from and then later depart back to Sydney.

As shown above, N900NC arrived into Sydney from overseas on Tuesday 22 February.
Sincere thanks to Sydney-based specialist aviation photographer Grahame Hutchison for allowing us to share this great photo!