Since 2021, the Queensland Rugby Union (QRU) have had a three year partnership deal with Alliance Airlines, and on Monday 21 February, Fokker F-70 VH-NKQ was photographed for the first time in Central Queensland with additional 'Official Airline Partner / QRU Reds' titles. 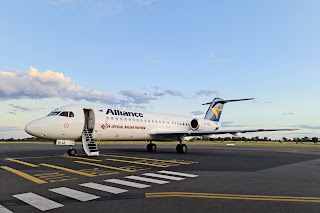 It is now the second Alliance Airlines Fokker F-70 jet to have these additional titles applied after VH-JFE was spotted with them as well about this time last year.

VH-NKQ is shown (above) parked up at Emerald Airport after earlier arriving from on the regular Fly-in Fly-out (FIFO) charter flight from Brisbane and Sunshine Coast Airports as UTY4078. It later returned to the Sunny Coast and Brisbane as UTY4079.

It is unclear when VH-NKQ made its first visit to CQ with the additional titles but it has since been noted visiting both Moranbah and Gladstone Airports, with the occasional trip to Emerald Airport.

As a part of the three year deal between Alliance Airlines and the QRU, the airline's brand will feature on the front of the Queensland Reds playing shorts over the next three seasons.

The Reds will also use Alliance’s aviation services during its team’s annual ‘Reds to Regions’ pilgrimage to all parts of the state - and for its regional Festivals of Rugby.

Alliance Airlines is the largest national air charter operator for the resources industry in Australia and continues to be recognised as a leading aviation professional, providing tailored and customised group travel and individual experiences through the provision of charter services.