On Monday 21 November, Virgin Australia Boeing B737-7K2(WL) VH-NBP was noted making its first visit into Central Queensland at Mackay Airport after it was acquired by the airline from KLM Royal Dutch Airlines. 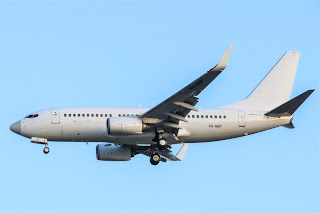 VH-NBP operated the VOZ601/4 early morning service from and back to Brisbane.  It had only entered service with Virgin Australia the previous day.

As mentioned, the B737-7K2(WL) was previously operated by KLM (Royal Dutch Airlines) as PH-BGW with it wearing a temporary registration marking of VP-CET prior to it then being placed on the Australian Aircraft Register. 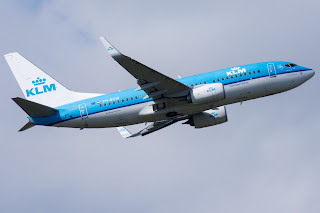 VH-NBP is pictured above and below at Brisbane Airport on Sunday 13 November as it arrived at the end of its delivery flight from Singapore (Seletar) Airport as VOZ9948. 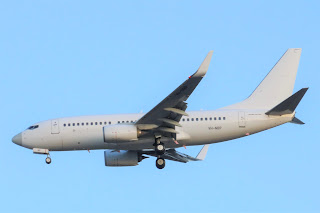 It’s also interesting to note that VH-NBP is yet to be painted into the Virgin Australia livery nor has been named.

As mentioned below, Virgin Australia will take delivery of seven former KLM B737-700 aircraft.

All these aircraft will reportedly operate with an all-economy 138-seat layout.

The third B737-700 aircraft due for delivery is 2-BBMH (to become VH-NHW) (ex PH-BGU) and is currently also at Singapore receiving pre-service maintenance.