From The Morning Bulletin and ABC News Online - Police are interviewing a man over an attack on an Australian Army Eurocopter EC665 ARH Tiger helicopter at Rockhampton Airport around 10am on Thursday 21 July.

They say the man made his way onto the tarmac by cutting a padlock on a gate, and then simply riding his tri-cycle up to the chopper. 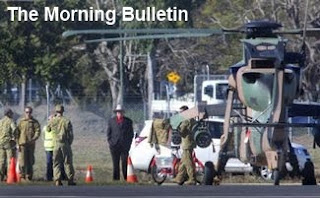 It is believed he then allegedly used a garden mattock or axe on the helicopter, as a protest against the joint US and Australian Military Exercise Talisman Sabre.

It is unclear how much damage was caused to the chopper as a result of the attack.

Police say he is yet to be charged.

The attack comes as a Rockhampton magistrate fined three protesters for trespassing in the Shoalwater Bay Training Area.
Posted by Damian F at 6:40 PM