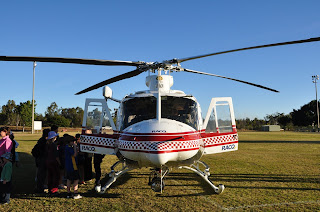 The Central Queensland Rescue Helicopter Service (CQ Rescue) has recently taken delivery of a new Bell 412EP helicopter. VH-EPK has joined two other Bell 412s in their fleet, with all of these operated by CHC Helicopters / Lloyd Helicopters. 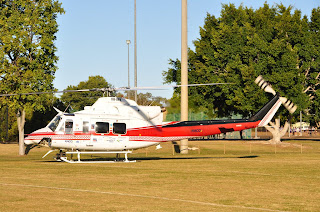 VH-EPK was recently the support helicopter for the Royal Australian Air Force Roulettes formation aerobatic display team, and was on display at the recent Whitsunday Airshow at the Whitsunday Airport at Airlie Beach.

Also, with the temporary closure of Clermont Aerodrome (Blog post HERE), emergency services aircraft and helicopters are being forced to make alternate landing arrangements until the revamp airport is open in late July.

One such arrangement is that the CQ Rescue helicopters are now landing at the Clermont Sportsgrounds. So far since the airport closure, there has been no less than three separate occassions that CQ Rescue choppers have been tasked to Clermont. On one such recent visit, the chopper landed at the Sportsgrounds late in the afternoon during a junior rugby league training session! 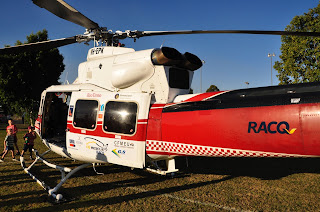 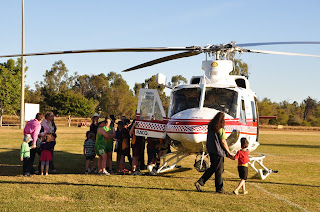 But as shown above, despite being tasked to evacuate an elderly patient, the CQ Rescue crew were very forthcoming in giving their time, and opened up the big Bell for the community to look at.
Posted by Damian F at 6:57 AM