Spotted making its first visit to Central Queensland at Rockhampton Airport late on a dreary Friday 6 July was Alliance Airlines Fokker F-100 jet VH-UQA.  It operated into Rocky on behalf of Virgin Australia Airlines as VOZ1245/1248 from and back to Brisbane. 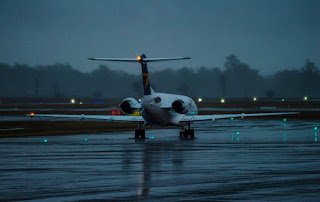 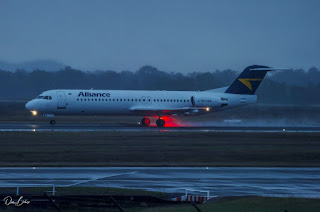 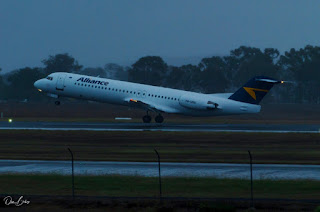 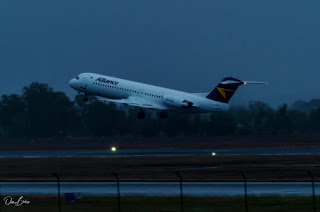 VH-UQA was delivered to Alliance Airlines in Brisbane from Kupang (Indonesia) via Townsville on Sunday 3 June and Monday 4 June.  It was registered to the airline in February 2018 and previously operated as OE-LVE with Austrian Airlines since 2004.

VH-UQA commenced service with Alliance Airlines on Wednesday 13 June operating a return flight from Brisbane to Cloncurry Airport and back.  It has then been operating Fly-in Fly-out (FIFO) charter flights based at Townsville before it returned to Brisbane from Trepell on Thursday 5 July.

Finally, of interest, over the course of last Thursday 28 June and Friday 29 June, Alliance Airlines also took delivery of Fokker F-100 VH-UQC also at Brisbane from Kupang via Townsville.  It remains at Brisbane and is yet to enter service.

Sincere thanks to local plane spotter Daniel B for braving the conditions and taking the to capture and send through these photos!

All photos taken by Daniel Bishop  ©
Posted by Damian F at 10:36 PM