Visiting Central Queensland once again on Wednesday 18 July was Mackellar Mining Equipment / Flight Options (Australia) Cessna 560 Citation Ultra bizjet VH-MMC.  It called into Biloela / Thangool Airport from the Sunshine Coast before continuing to Emerald Airport later in the day.  I was able to capture VH-MMC parked on the Emerald Airport visitors parking apron where the Citation appeared to be staying for at least the night. 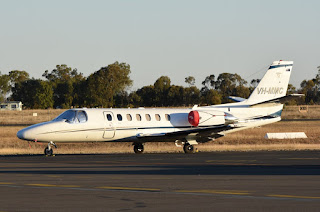 UPDATE!  On Thursday 19 July, VH-MMC departed Emerald Airport for Biloela / Thangool Airport before it later returned to its Sunshine Coast base.