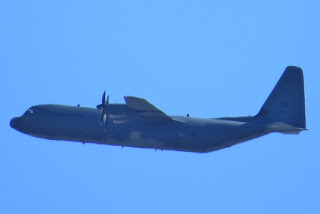 After a little while on the ground, the Herc was spotted above departing to Melbourne (Tullamarine) Airport.

Of interest, it appears that A97-450 no longer wears the attractive tail art it was spotted with at Rockhampton Airport last year as shown below.


Sincere thanks to local plane spotter Kayanne H who captured the photo at the top of this post from her backyard as the Herc departed!