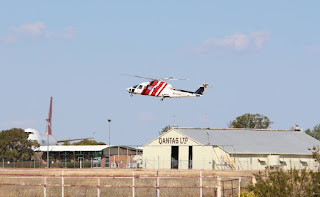 Local plane spotters Greg W and Calen H were both on hand at Longreach Airport as it arrived from Charleville Airport. 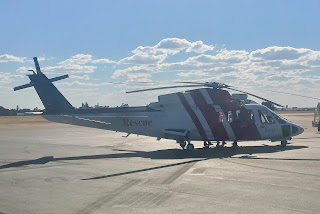 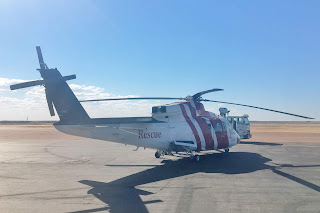 The Sikorsky, which is operated for the Royal Australian Air Force (RAAF) in a Search and Rescue (SAR) role by CHC Helicopters / Lloyd Helicopters, earlier departed RAAF Base Williamtown (Newcastle) for Moree before completing fuel stops at Charleville and Longreach Airports.  It then continued to Mount Isa and is due to continue to Macarthur River Mine on Saturday 27 July and then possibly further.

I believe it is heading to the Northern Territory to provide support for the upcoming joint Military Exercise Pitch Black 2018 which will kick off at both RAAF Base Darwin and RAAF Base Tindal (Katherine) in the coming days.

UPDATE!  Indeed, on Saturday 27 July, VH-HRP "Choppa 22" continued to Darwin where it will be providing a support role during Exercise Pitch Black 2018.