Later, Adelaide based Cessna 525 Citation CJ1 VH-TFW also arrived at Hamilton Island from the Gold Coast before departing for Adelaide.

At Gladstone Airport, a nice pair of bizjets were also noted on Monday 19 March. Marcplan Charter Embraer EMB-135BJ VH-VLT was noted arriving from the South mid-morning.

Shortly after, Execujet Gulfstream G-IV VH-DBT was also noted touching down at Gladstone Airport. The Gulfstream later departed for Brisbane, but later returned to Gladstone. It appeared that both aircraft were overnighting.

Lastly, Gulfstream G-IV bizjet, N810LP, of Kefford Corporation (of Victoria), was noted at Longreach Airport on Monday 19 March. It had arrived from and departed back to Canberra and Essendon. N810LP is pictured below earlier this year at Essendon Airport where it is seemingly based. 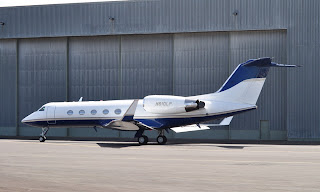 Also noted at Longreach on Monday was Brisbane based Pilatus PC-12/47E VH-AAD.
Posted by Damian F at 8:06 AM