QantasLink Boeing B717-200 and Others at Mackay Airport Sunday

A Brisbane based spotter popped into both Rockhampton and Mackay Airports, and has sent to me some of his notes from Mackay Airport on Sunday 11 March.

Also on the QantasLink section of the Mackay Airport apron was Cobham Aviation-operated Boeing B717-200 VH-NXN which was at Mackay Airport from 1030-1430 completing some ground crew training. VH-NXN is pictured earlier this month at Rockhampton Airport. 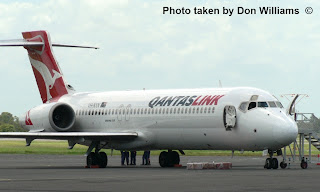 VH-NXN arrived into Mackay earlier in the morning as QFA1774. Scheduled QantasLink B717-200 services to Mackay will be starting on Monday 26 March.

Also noted at Mackay was Virgin Australia Boeing B737-800 VH-VUM which has recently revised 'Airline of Virgin Blue' titles. The aircraft actually made two visits to Mackay on Sunday operating as VOZ609/610 and then later as VOZ613/616 - both Brisbane-Mackay-Brisbane. Virgin's Embraer E-190 VH-ZPE was also noted operating the DJ1471/1472 service from and back to Sydney.

Lastly, Jetstar Airways Airbus A320-200's VH-VQH, VH-VGD, and VH-VQV were noted operating the airline's services from and back to Brisbane.
Posted by Damian F at 7:02 AM