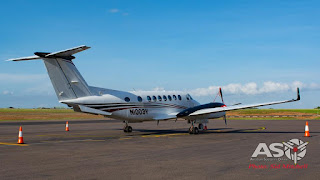 The Super King Air had arrived in Darwin from overseas late last week and is believed to be on delivery to an Australian operator.

It was photographed by local plane spotter Sid M shortly after its arrival.

Of interest, N1003V was the second Textron Aviation (Hawker Beechcraft) B300 Super King Air to pass through Darwin over the last week with N988KA (c/n FL-988) arriving into Cairns from Darwin on Friday 9 December.

UPDATE!  N1003V has since been placed on the Australian register as VH-KQG to Hawker Pacific of Bankstown. 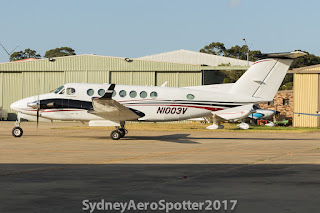 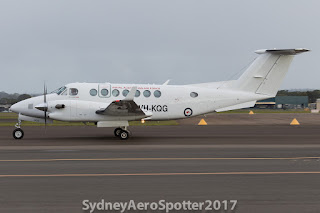 Reaseach reveals that VH-KQG is one of four new Super King Airs that Hawker Pacific are preparing for service with the RAAF.  The four new aircraft will undergo modification to the Mission Aircrew and Aviation Warfare Officer (AvWO) training role. They are presently on the Australian Aircraft Register as VH-KQF (msn FL-988) (ex N988KA mentioned above), VH-KQG (FL-1003), VH-KQD (FL-1008) (ex N5108B) and VH-KQE (FL-1021) (ex N121HK) but are expected to be transferred to the RAAF and take up RAAF serial numbers in coming months.