There were a couple of corporate turboprop and bizjets to yet again call into various Central Queensland Airports over the last week.

Also on Friday 16 December, Embraer EMB-550 Legacy 500 bizjet N142GZ arrived into its Mackay Airport base from Brisbane.  It had flown South on Tuesday 13 December.

On Thursday 15 December a couple of corporate King Air turbroprop aircraft called into Mackay Airport.  Hawker Beechcraft C90GTi King Air VH-JJU operated a return flight to Mackay from and back to its Cloncurry base, while former RFDS (now privately owned in Brisbane) Beech B300 Super King Air VH-SQR departed to Barkly Downs. 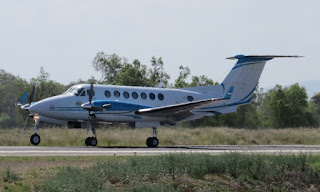 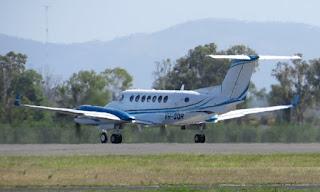 UPDATE!  VH-JJU arrived back into Mackay Airport on Saturday 17 December from Cloncurry and was due to depart back there on Sunday 18 December.

Out at Emerald Airport, on Wednesday 14 December, Mackellar Mining Equipment / Flight Options (Australia) Cessna 560 Citation Ultra bizjet VH-MMC visited once again, this time arriving from its Sunshine Coast base via Biloela / Thangool Airport.  It returned to the Sunny Coast on Thursday 15 December.

All photos taken by Kayanne Hardsman  ©
Posted by Damian F at 7:09 PM