On Thursday 8 December, the Queensland Police Service (Airwing) Cessna 560 Citation Ultra bizjet VH-PSU flew into Rockhampton Airport from Townsville.  It had flown into Cairns and then Townsville in Far North Queensland from Brisbane the previous day. 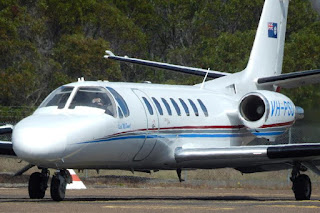 After a couple of hours on the ground, VH-PSU then departed to Maryborough Airport - where it is shown above on the a previous visit.  VH-PSU then returned to Brisbane.