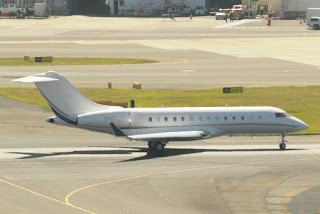 While plane spotting in Sydney from the Rydges Sydney Airport Hotel, I was fortunate enough to capture the smart looking bizjet as it arrived from Hong Kong and then departed to Hamo a short while later.

On Tuesday 20 December, Balmoral Air Dassault Falcon 2000LX bizjet VH-WIO made yet another visit arriving from and later departing back to Bankstown.

Finally, after arriving at Hamo from Sydney on Monday 19 December, Execujet Australia Bombardier CL-600-2B16 Challenger 604 bizjet VH-VSZ is due to depart back there on Thursday 22 December.
Posted by Damian F at 7:56 PM