Over the course of this week, QantasLink Dash-8-Q400 VH-QOB has finally ventured South to Central Queensland after operating out of Cairns and Townsville in North Queensland since it was re-painted into the new Qantas 'Dreamliner' livery during January.  It was noted visiting Mackay Airport before spending the night parked at Rockhampton Airport on Monday 5 February. 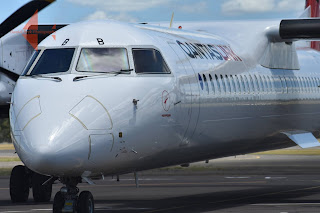 Since then, VH-QOB completed flights to all parts of Central Queensland from and back to Brisbane and it was finally photographed on Friday 9 February operating into Bundaberg Airport on the scheduled QLK2326/2327 service. 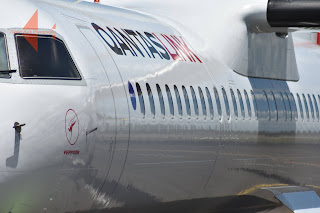 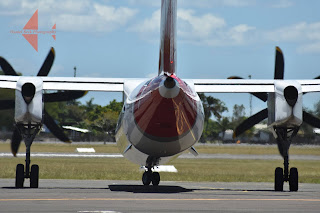 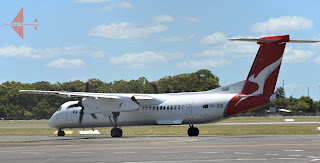 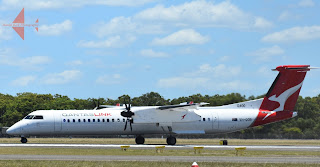 VH-QOB looks to have retained its original name of 'Yeppoon'.

VH-QOB was the second of four QantasLink Dash-8-Q400's that so far have been re-painted into the new Qantas livery at the Flying Colours facility at Townsville Airport.  At present, VH-QOA and VH-QOC are the other Dash-8-Q400 turboprops to be re-painted with VH-QOD expected to emerge from the paint shop on Saturday 10 February (today!).

I noted that Dash-8-Q400 VH-QOE was flown to Townsville late on Friday 9 February and should replace VH-QOD in the Flying Colours paint shop.

As we've reported previously, VH-QOE and VH-QOF are the final two QantasLink Dash-8-Q400s to wear the very old 1984-style Qantas livery and will all soon be re-painted in the new and updated livery and kangaroo logo, which was introduced to coincide with the introduction the Boeing B787 Dreamliner into service late last year.

Research also reveals that as many as nine QantasLink Dash-8-Q300 aircraft have also been re-painted into the new Qantas livery.  VH-SBJ was also photographed at Bundaberg Airport in recent weeks operating into the rum city from and back to Brisbane. 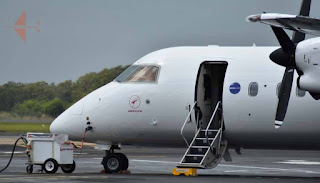