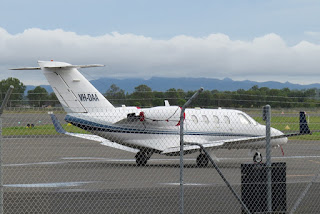 On Friday 23 February, VH-DAA returned back to Archerfield.

Meanwhile, over the latter part of this week, a couple of other familiar corporate and medical bizjets were also noted popping into various CQ Airports.

Also on Friday 23 February, both LifeFlight (Aeromed) LearJet 45 bizjets VH-VVI and VH-CXJ were both noted at CQ Airports.  It appears that VH-VVI possibly completed a training flight from Brisbane to Bundaberg Airport and back, while in the afternoon, VH-CXJ looked to call into Mackay Airport from Brisbane on a medical evacuation flight as "Ambulance 452".  It later departed to Townsville.

Finally, back on Tuesday 20 February, Balmoral Air Dassault Falcon 2000LX bizjet VH-WIO visited Hamilton Island Airport once again.  As usual, it arrived from and later departed back to its Bankstown base.