On Christmas Eve, Tuesday 24 December, a nice trio of Australian bizjets were noted arriving into Hamilton Island Airport. Their arrival continues the good run of corporate bizjets and smaller General Aviation (GA) aircraft to call into the beautiful Whitsundays in the lead up to Christmas.

It later returned to Essendon.

It looked to be staying on Hamo for at least the night. 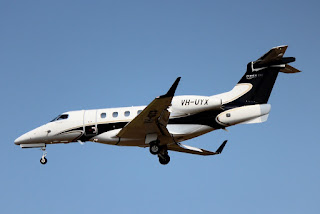 It later departed to the Sunshine Coast where it is photographed above arriving during the middle part of the afternoon.

It’s also worth mentioning that the visiting American registered Bombardier BD-700-1A11 Global 5000 N2QE remains parked on Hamo after it arrived from Sydney on Friday 20 December - see Blog post below.

Sincere thanks to the Sunshine Coast Plane Spotting Facebook page for allowing us to share their great photo of VH-UYX!
Posted by Damian F at 8:00 PM