On Tuesday 30 December, there were yet more locally-based bizjets to visit Hamilton Island Airport, continuing the excellent of run of corporate and other General Aviation (GA) visitors to the Whitsundays and the Central Queensland region over the Christmas period.

First to arrive was Avcair (Avgunn) LearJet 60 bizjet VH-ILJ which touched down at Hamo from Brisbane via the Sunshine Coast.


It later returned to Brisbane.

VH-UYX had visited Hamo last Tuesday 24 December, arriving from Bankstown and Sydney and later departing to the Sunny Coast.

And Balmoral Air Dassault Falcon 2000LX bizjet VH-WIO was noted making yet another visit to Hamilton Island Airport.  As per usual, it arrived from and later departed back to Bankstown.

A nice corporate turboprop noted visiting Emerald Airport also on Monday 30 December was Sundown Pastoral Company (of Bonogin in the Gold Coast Hinterland) Raytheon B300 Super King Air VH-NSI. The sleek Super King Air was noted arriving from the Gold Coast and Moree in New South Wales before it later departed to Pinnarendi.

Finally, a couple of nice little Cirrus Design Corporation light GA aircraft to visit the region on Sunday 29 December included SR22 VH-TOL which visited Bundaberg Airport from Caboolture. While Grams Aviation SR22 VH-MCX was spotted at Rockhampton Airport after earlier arriving from its Sunshine Coast base. 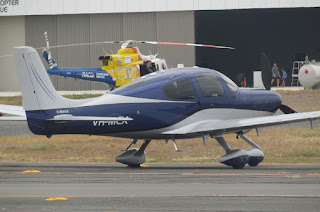