We popped into the Whitsunday Airport at Shute Harbour late on Friday 20 December and were able to photograph some interesting fixed-wing visitors including Brisbane-based Cessna 525A CitationJet2 bizjet VH-MOR. 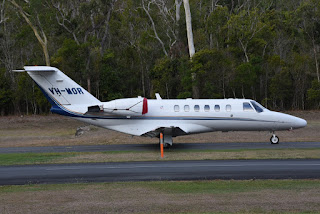 The hard-to-track Citation looked to arrive at the start of the week on Monday 16 December from Archerfield.

UPDATE!  We heard VH-MOR depart early on Saturday 21 December and it looked to return to Archerfield. 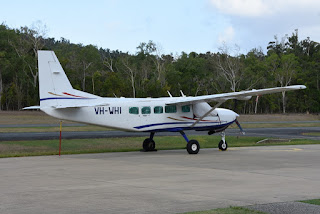 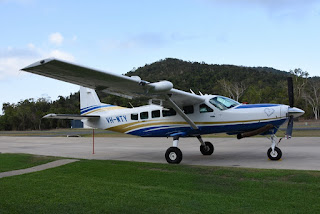 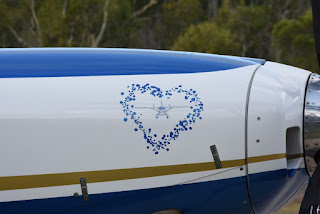 Both seem to now be on wheels (rather than floats as VH-WTY was photographed weeks ago) and are being utilised on scenic flights around the Whitsundays from the Airport.

The Whitsunday Air Services / Hamilton Island Air Gippsland Aeronautics GA-8 Airvan VH-KIQ has also been spotted at the Whitsunday Airport at Shute Harbour in recent days and also seems to be operating scenic flights from the Airport. 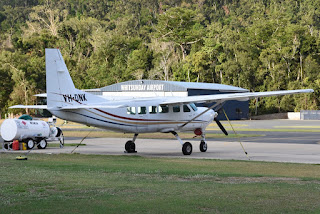 Fellow Wollongong-registered Cessna 208 Caravan VH-NMV also arrived into the Whitsunday Airport earlier in the week on Tuesday 17 December from Tyagarah via the Gold Coast and seems to also be operating for Skydive Airlie Beach. 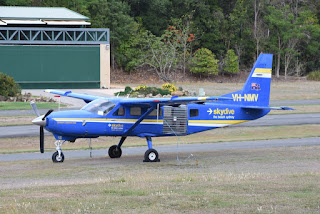 Of interest, another Wollongong-registered Cessna 208 Caravan VH-OAI which had also been at Shute Harbour, departed to Cairns on Monday 16 December.

While interestingly but out of the CQ region, one final Wollongong-registered Cessna 208 Caravan VH-YMV ferried from the Sunshine Coast to Tully late on Friday 20 December.

UPDATE!  On Saturday 21 December, VH-YMV returned from Tully to Redcliffe via Gladstone Airport.

Finally, one other skydiving aircraft which sometimes operates from Bowen Airport in the form of Pacific Aerospace PAC750XL VH-ZVM was in CQ passing through Emerald and Roma Airports while flying from Innisfail to Port Macquarie late on Friday 20 December.
Posted by Damian F at 11:29 PM