On Tuesday 3 December, Dick Smith's new Cessna 208B Grand Caravan EX VH-MIF was noted arriving into Bundaberg Airport.  It looked to arrive from the North, possibly the Whitsunday Airport at Shute Harbour. 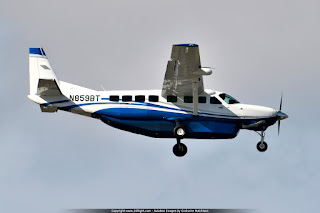 UPDATE!  It appeared that VH-MIF spent the night at Bundy and departed South to Bankstown via Toowoomba on Wednesday 4 December.

Flight tracking websites suggest that VH-MIF flew North into the region on Sunday 1 December from Bankstown via stops in Far North Queensland.

Of interest, VH-MIF was delivered new to the Australian adventurer in April this year, flying in from the USA into Sydney (as shown) with the American delivery registration marking of N859BT.  Dick Smith previously flew a Cessna 525B CitationJet CJ3 also registered VH-MIF when visiting locations around Australia - as shown below at Mackay Airport in 2015.


The Citation looked to be disposed of in 2016 and was placed on the American Aircraft Register as N523CB.

Meanwhile, it's also worth mentioning a couple of other interesting light General Aviation (GA) aircraft that have been noted also visiting CQ Airports over the last couple of days.

Finally, also on Monday 2 December, AirServices Australia / Aero Pearl-operated Hawker Beechcraft B300 Super King Air VH-FIZ flew into Charleville Airport from Brisbane.  Then on Tuesday 3 December, it looked to complete navigational aid (NAVAID) calibration flights from Charleville Airport to Ballera and back.  As per usual, VH-FIZ was using the flight number 'ADA4' and the radio callsign of "Auscal 4".