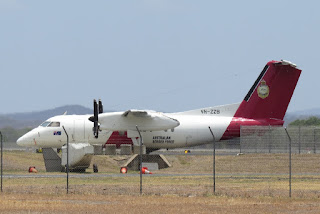 The Australian Border Force Dash-8 aircraft haven't been seen in Central Queensland for some time and it is interesting to note that in recent days, two three of their aircraft have been noted operating out of Rockhampton Airport on off-shore sorties.

It is believed that fellow Australian Border Force Dash-8-200 VH-ZZC first arrived into Rockhampton Airport last Thursday 12 December and operated from Rocky the next day and over the weekend.  It was heard to be using its 'usual' radio callsign of "Borderforce 33" as well as other possibly 'covert' radio callsigns.

It appears that VH-ZZB arrived into Rockhampton Airport on Wednesday 18 December as "Borderforce 22" and has also been noted using other radio callsigns.

Sincere thanks local plane spotter 'IAD' for taking the time to capture and send through this great photo!