On Thursday 11 November, Hevilift Australia (Fixed Wing Division) ATR 72-500 VH-FVI was noted arriving into Moranbah Airport on one of their week-daily Fly-in Fly-out (FIFO) charter flights from Brisbane as HT727. 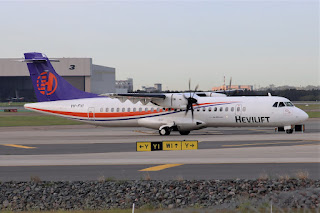 Then on Friday 12 November, VH-FVI returned to Brisbane as HT728 before operating back to Moranbah Airport and back to Brisbane as HT721/2.
Research reveals this ATR 72 to be previously registered as VH-YWV which was operated by Hevilift Australia from mid-2020 after it was delivered to the airline in Brisbane as OY-CLU.  The final flight the ATR 72 took as VH-YWV was on a closed charter flight to and from Birdsville and then Ayres Rock (Yulara) starting at Brisbane and then Rockhampton Airports in early October.

Meanwhile, Hevilift Australia has taken (official) delivery of fellow ATR 72-500 VH-FVL at Cairns.
The former Virgin Australia ATR 72 had departed Australia in July 2017 for storage at Nelson in New Zealand.  It returned to Australia via Brisbane and then Cairns in early March 2020.
VH-FVL remained parked at Cairns and was photographed in June 2021 looking slightly worse for wear.
VH-FVL was then photographed in late September 2021 soon after being rolled out of the hangar in the full titles and livery of Hevilift Australia.  It looked to enter service with Hevilift on closed Fly-in Fly-out (FIFO) charter flights between Townsville and Osborne Mine and also Cairns and Mount Gordon Copper Mine.
We are yet to see VH-FVL in Central Queensland.
Photos taken by Lloyd Fox and Jonathan Williams  ©️
Posted by Damian F at 7:10 PM